Known for its impressive diving, the world-famous white sandy Champagne Beach, turquoise blue holes and welcoming friendly people, the hardest decision will be what to do first. Here are few suggestions to get you daydreaming and some great deals to get you packing: 1. Champagne Beach
Take a drive to the stunning Champagne Beach, which gets its name from the underwater spring bubbles. Run your toes through soft and pure white sand, which extends several metres into translucent blue water; backed by a luxuriant jungle, and of course whilst sipping champagne, well it would be rude not to really.

2. Blue Holes
Espiritu Santo is home to some of Vanuatu’s natural wonders, the blue holes. While kayaking in the rivers running through lush tropical forests, adventurers will discover these large karst formation springs, which range from three to 30 metres deep. Filled with incredible crystal clear, blue waters and an abundance of lively fish, the holes are popular amongst snorkellers.

At over 200 metres long the ship is mostly intact, making it possible to do over 20 different dives, ranging from 20-60 metres deep. In addition to the wreck, the Coolidge has formed a large artificial reef home to a wide variety of marine life for divers looking to witness diverse marine species, including large pelagics to the smallest of sea creatures. This is definitely a highlight of Santo.

5. Millennium Cave
Tackle the action-packed tour to Millennium Cave, Vanuatu’s largest cave. Trek through tropical forest to reach the cave, scrambling over boulders and then cooling down with a river swim before climbing the steep incline back to the village of Funaspef. The cave is situated in South Central Santo, a 45 minute drive from Luganville town then a 15 minute walk through a coconut plantation and across a rigidity bamboo bridge.

The cave sports a high ceiling at about 50 metres high, and is home to a large number of bats and sparrows. At around three to four kilometres long, visitors navigate the river bed using torch light to examine the cave walls and ceiling before arriving at the waterfall. This is one for the adventurous traveller. 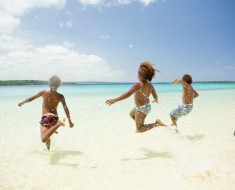 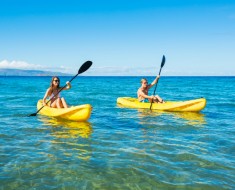